Weird Salty Aftertaste in my Mouth 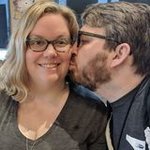 By SportsGalPal,
January 6, 2015 in Troubleshooting your Whole30