Starting September 1 - Who's with me? 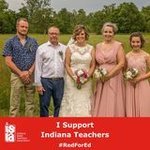