Poptarts and reflections on Day 29 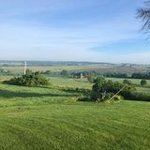