Radical change in behavior...not in a good way 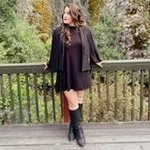