Lots of Energy but Dark Circles? 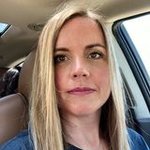