Trying to eat better with kids - this is HARD 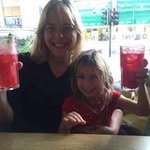